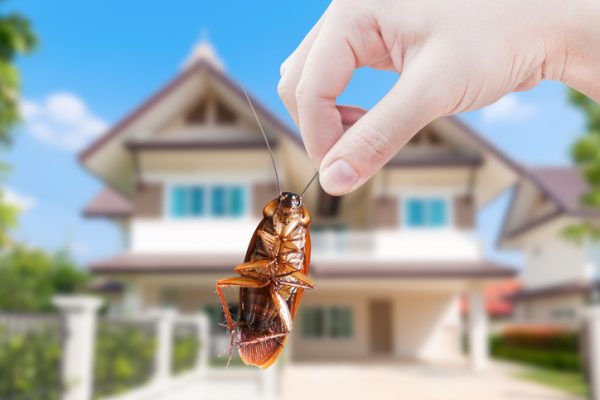 Cockroaches are some of the oldest surviving insects in the world, and they have diversified into thousands of species throughout the world. If you’re like most people, just the thought of finding a roach in your kitchen gives you the shivers. But if you do, understanding what type of roach you’ve just found can be helpful.

In most cases, if you discover roaches in your house, it is likely to be one of the following four types.

American Cockroach. These are the largest cockroaches that we generally find in homes, growing up to 53 millimeters long. They are reddish brown in color, with yellow bands just behind the head. These roaches have wings, and can fly short distances. Because they can live about two years, it’s easy to imagine how many eggs a female American roach could lay in her lifetime.

Brown-banded Cockroach. Quite a bit smaller than American cockroaches, adult brown-banded cockroaches only reach about 13 millimeters in length. They are also reddish brown with yellow stripes, but the stripes are more around the body area than just behind the head. Only the males have wings and can fly, but both males and females can jump when disturbed! Luckily, the lifespan of brown-banded cockroaches is much shorter, at three to 11 months, but they can still multiply quite proficiently during that time.

Oriental Cockroaches. These glossy, dark-brown or black roaches are on the larger side, with females reaching up to 32 millimeters and males reaching about 25 millimeters long. These roaches feed mostly on decaying organic matter, and live about six months. Fortunately, neither the males nor the females can fly – but seeing them scurry about can still be pretty unsettling!

German Cockroaches. On the smaller side at 13 to 16 millimeters in length, German cockroaches might seem less threatening than larger species. But looks can be deceiving; German roaches produce more eggs than any other species, making them particularly difficult to eradicate. If you find smallish, pale-brown roaches with darker stripes behind the head, chances are you have German cockroaches in your house.

If reading this blog gave you the creeps, you’re not alone. Most people recoil at the thought of roaches invading their homes. But the good news is that we know how to deal with them quickly and effectively. Give us a call at the first sight of a roach anywhere within your house, and we’ll eradicate them and restore your peace of mind.